A Whole Bunch of “WOW” Factor News This Month! 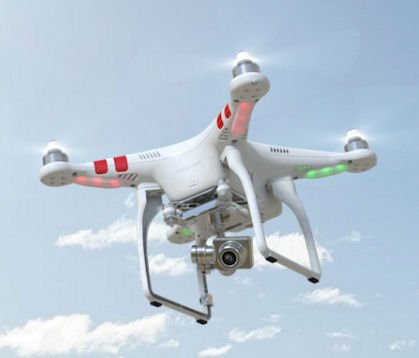 About a month ago, one of our top realtor clients called and asked me whether I had seen the new drone helicopter cameras that some of the more internet-savvy realtors were using to show off properties nationwide. It’s funny but I had purchased a drone about a year ago when they first started becoming more sophisticated and easier to fly. Mine was one of those AR Parrot Quad Copters with a couple of small digital cameras on it. It was more of a toy than anything else. When our client called me I had a renewed look at what was available on the market and like EVERYTHING ELSE in the world of technology – drones have become ultra sophisticated.

Over the last year or so a company called DJI Innovations put out a new copter that would virtually take over that market. Hundreds of photographers and entrepreneurs quickly gobbled up these new devices. In fact, they reacted probably a bit too quickly because within just another couple of months DJI launched an upgraded quad copter that included a 3-axis gimble which turned what was already “pretty great imagery” into cinematographic genius for anyone wanting to capture great aerial photography.

As you can imagine, realtors and vacation rental management companies have been among the first to look at these “flying cameras” as a means of better promoting their rentals, homes, lots, farms and large acreage tracts for sale.

Here at AppNet we work with hundreds of realtors and real estate agencies nationwide and because of that I spent a bit more time researching the new technologies and what we’ve found is that while the technology is AWESOME – most realtors are simply not prepared for the amount of time and skills needed to not only fly the thing, but to then produce a video that is good enough to actually do a property justice.

Of the realtors who have used the drones, most have provided testimonials that are “off the charts” in terms of how much they help to sell potential home or land buyers. Most also admit that they’d probably hire out the film work in the future – hinting that they burned a lot of time putting one movie together.

Budding, young entrepreneurs have already popped up around the United States offering to fly the drones, shoot the video and then produce the videos for prospective clients. These young, start-ups have admitted that most realtors are dying to have videos made, but they are not as understanding about the amount of time that goes into producing one.

We couldn’t miss an opportunity to have some fun so we went out and purchased the newest model drone and in a word it is AWESOME. However there ARE some drawbacks. You can only fly it about a half-mile away and you only get about 20 minutes of flight time out of a $159 battery. We’ve already “steroided” ours up a bit so that it can fly nearly two miles away and we bought three more batteries. So we now have about $2200 in the thing. (But it IS a lot of fun!)

My wife calls it “her bathroom” because I could’ve/should’ve spent that money on a new bathroom makeover that she wants. Her complaints escalated when after only two flights I crashed the thing up on top of the 5000′ elevations of Sugar Mountain. However, after tons of successful flights I flew it over at one of the most beautiful lakes in America (Watauga Lake in East Tennessee) and when she saw that film, she freaked.

She no longer calls it her bathroom, but she still thinks it’s a toy. She’s probably more correct than I care to admit.

All that said, AppNet owns a drone and we can fly and film almost anything you’d want to promote. Certainly they’re great for real estate, but there as good or better for vacation rental homes, inns, marinas, attractions, downtowns and more.

CHECK OUT THESE TWO VIDEOS THAT WE TOOK OVER THE LAST WEEK:

Pretty crazy, huh? Because these videos can be hosted on YouTube, they offer valuable, “rich-media” content that Google rewards with rankings. There is NO question that these aerial videos are fast becoming an awesome way to show off your property and if you’re interested in more information – just call our office and we can price your project.

WE ARE FAST APPROACHING FIFTY PERCENT OF YOUR VISITORS GOING TO YOUR WEBSITE FROM A MOBILE DEVICE!!!!

Matt Snyder, one of our top “data miners” and all-around smart guy, stepped into my office this morning and shared some numbers that are simply STAGGERING to me. We all know that more and more people are now searching the internet and visiting websites from mobile devices such as iPhones, Smartphones, Androids, iPads, Kindles, Samsung Tablets and on and on. I knew that the numbers of people visiting websites via mobile devices was rising each month. However, evidently while we blinked two or three times – those numbers have sky-rocketed!

We happened to be checking up on one of our eCommerce/Tourism clients and Matt reports that over the last 30 days (basically from May 1st through May 28th) that 28% of the visitors that visited AsheCountyCheese.com used phones to do so! 16% more used a tablet. My friends, that is a whopping 44% of their traffic to their website within the last month that used some type of mobile device. His data showed that just a bit more than 50% of the website’s visitors came from desktops.

Just FYI – that’s happening on YOUR WEBSITE as well!

Interestingly (but not all that surprising) he also found that the larger the city – the higher the percentage of people who used mobile vs desktops to surf the net.

We’ve been hearing from more and more of our clients about getting their websites “mobile optimized” and these kinds of numbers are dictating a more immediate need to respond to that demand. The newest web development trends are to now design websites that are responsive for any device – basically redesigning itself for whatever device that visits the website.

If you’ve been thinking that it was TIME to “do something” with your website – NOW is the time to prepare your website for the masses of people who will be viewing it via a mobile device. Times – they are a changing!

Just need to
ask a question?

Meet Our Team
Our Portfolio
Request a Quote

Give Us a Call

Get started on your project today!